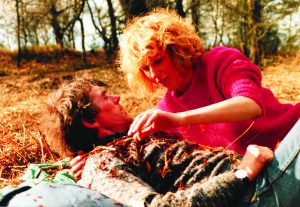 ‘What Remains’ is a film and peer support project that raises the questions of why it’s so hard to talk about suicide and what can be done to support the people most affected by it’s legacy.

“When I was 12 my Dad died by suicide, and given the nature of his method, my Mum decided it was better not to tell us children what had happened. She kept the truth a secret because, not only did she want to protect us from our own imaginations, but also she did not want any of us to be seen as, or to feel like, victims. My Mum felt that suicide was an ultimate taboo in our society and she didn’t want any one to judge her husband.” MARY BROOKS

Suicide is the most common cause of death amongst men under 35. It is the leading cause of death for men under 50 in the UK. And, although the focus on ‘prevention’ rightly remains high, we also need to develop more effective and caring ways to support those ‘left behind’ by suicide … the friends, the family members, the loved ones.

‘What Remains’ is an original film and workshop-based project that brings people together affected by suicide loss and bereavement to talk, to share, and to try and break down some of the stigma and barriers to understanding.

The Film
After the death of her husband by suicide Gillian Brooks tried to make sense of the events and preserve memories for her children. So she wrote it down as a story. Now her words have inspired a film made by Gillian and her family with the help of award-winning filmmaker Geoff Brokate.

The film has been widely screened to groups, support workers, and health commissioners across the North of England. The response has been amazing:

“One of the most incredibly powerful films I’ve ever watched as someone bereaved by suicide. Gillian & family are courageous & captivating in it & in person at the Q&A I was at. It was so thought provoking with a refreshing perspective on suicide & grief – truly eye opening!” Audience Member

“Your film is truly beautiful, so full of love, courage and priceless memories. Your story really resonated with me and gave a glimmer of hope that in time I will be able to embrace all the amazing memories I have without the solid lump in my throat and without feeling so much raw pain. I am so very grateful to you for that hope.” Peer Support Group Member

The film screenings are accompanied by a Q&A discussion with Gillian and Jeff from from Verd de gris arts. We want to open up a conversation about the themes raised, but also to look at what local communities can do themselves to develop a response to local need regarding suicide bereavement support.

You can watch the film here: