TOGETHER WE ARE
An ’emotional resilience’ project for girls attending two primary schools in Calderdale, Beech Hill in Halifax and Deansfield in Ovenden.

These schools have student bodies that represent the ethnic and cultural diversity of communities in Calderdale. The schools are working together to support each other around academic attainment, but also around issues of community cohesion, emotional resilience, understanding of difference.

“The sessions involve many different creative activities and aim to increase the confidence of the children involved. They form part of the MANY VOICES project which has the overall aim of empowering women and girls and encouraging them to believe in themselves and be the best they can be. We are really keen to develop links between the two schools and this project will help us with that.

The girls will take part in a performance at the Square Chapel Arts Centre in March as a final celebration of their time together.”

We are joined on this project by dance artist and choreographer Natalie Speake.

The project takes in notions of identity, empowerment and intercultural understanding.

We are aware of how difficult this kind of project is, and how very sensitive we need to be to all the girls needs. Some of the girls are struggling emotionally, at home or with their self-confidence in school. Bringing together these two very different requires us to build a great deal of trust and understanding. The girls have been unsure and felt vulnerable, worried about showing themselves to others from a different school and different ethnic / cultural background. We are aware that there is a real need for more of this kind of ‘shared’ work: to help improve understanding.

We deliver very gentle, held sessional work, but try and ‘nudge’ the girls all the time to build their confidence and to help them articulate who they are, and what it is they want to say. As a result, we have seen a real shift in relationships and can feel the girls starting to trust each other and the process.

Staff at Beechill have done particularly well in keeping their group together – three of the girls were struggling but the school sees how important this project is and is trusting of the process:

“I think the reason for the reticence of some was mainly the fact that the Beech Hill girls found it difficult to build relationships with the girls from Dean Field straight away. Sharon has always developed strong relationships very quickly in the past and I believe if the project had just been with girls from Beech Hill, this would have been the case again. However, the backgrounds, family lives and beliefs of the girls from the two schools at a general level are very different. To be more specific, the girls from Beech Hill were selected because they would benefit from a boost in confidence which was one of the focuses of the project.

Despite them all needing this support to develop their own self-belief, their needs were based very much on individual circumstances. For example, one girl has a father who has recently been released from prison and he is not allowed any contact with mum; another girl has a very sporadic relationship with mum and has to meet in a supermarket car park with her social worker in order to have contact with mum because mum cannot see dad; another girl had a very young sibling who died recently; one of the girls has a mother who is very negative towards her, particularly with regard to physical appearance; one girl struggles with friendships because she probably speaks her mind too much and does not quite follow social conventions; others are simply ‘quiet’ at school.

In contrast, the girls from Dean Field were selected due to the fact that they find learning in the classroom difficult and some could be quite attention-seeking. We certainly created an interesting mix of characters – and they needed time to get to know each other! Sharon and Natalie recognised that the girls were out of their comfort zone but did not shirk away from the fact that they would find sessions challenging, and continued to put together activities that would ensure the relationships blossomed eventually…and they did.” Sara Cockcroft

In March the girls took to the stage as part of the #IWD2020 celebrations: our aim was to create a performance piece based on what stories the girls want to share with an audience. It was a wonderful, moving piece, and we are proud of all the girls who took part.

The following is taken from the evaluation report compiled by Sara Cockroft, Deputy Head at Beech Hill:

“It was wonderful to see the positivity that did come from the girls as the project went on – Year 6 teachers and members of staff commented on the fact that the quieter girls from the group were more willing to contribute to whole class discussions during the spring term. They were very responsible in ensuring they had what they needed for the performance. The girls’ own words speak volumes. Many mentioned feeling ‘nervous’ about the project at first and then later about the performance. One girl admitted to feeling ‘uncomfortable’ at the beginning but went on to say that it got ‘better and better’ and she ‘got used to the people from Dean Field’. She also describes the group feeling of being ‘powerful’ and ‘unstoppable’. Another girl explained that the group made her ‘feel happy and confident’ and states, ‘I even made friends with girls that were from Dean Field!’ Another said that she ‘was nervous about working with others but now I know them more it is really fun’. One girl added that ‘problems outside verd de gris are sorted in the group’, that she has ‘friends there and there are challenges to face’, she ‘so proud’ to be part of the group and ‘#Girls got power (we got the power)’.

The final performance at the Square Chapel was absolutely stunning. I was blown away by the confidence of the girls performing in front of a packed auditorium and delivering such a powerful message. There was a real sense of comradeship between all the performers, including both children and adults, and I’m sure it’s something the girls will carry with them for their whole lives. They really do have the power and have realised that they are powerful when working together – even with people who they felt uncomfortable with upon initially meeting them. So many great life lessons have been learnt – for example, perseverance with relationships, acceptance of others (particularly from different walks of life), strength in numbers, standing up for your beliefs and what is important to you. In the words of one of parents: ‘I attended the performance along with my sister. My daughter performed. It far exceeded my expectations. It was so powerful and emotional. I felt a part of something with the rest of the performers and audience and my sister even felt really empowered within her after watching it. It was absolutely fantastic and amazing – I took so much from it as a person. Just ‘wow’!’” Sara Cockroft 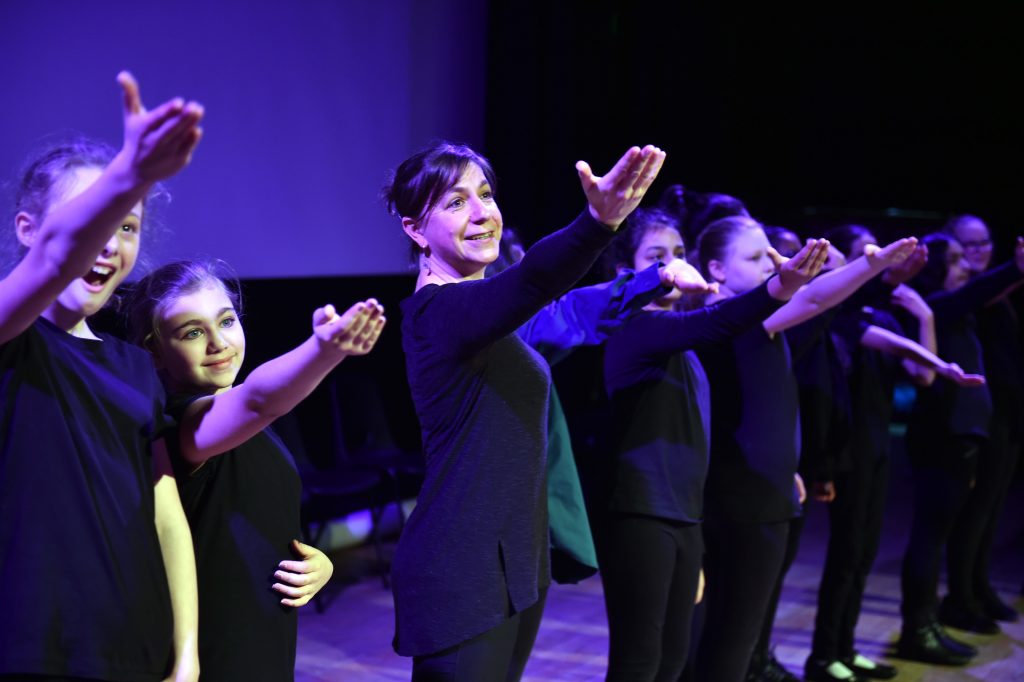